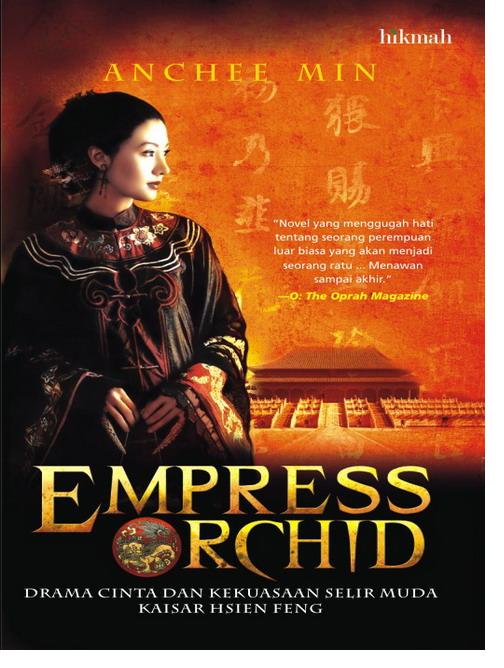 Generally after I finish reading a book, usually on the very day itself, I open a blank word document and start writing my review. But the page for this book stayed blank for a very long time. I didn’t know what to write, from where to start. There were so many details, so many parallel stories and so many emotions in this book; I almost did not write this review for the fear of not getting it right.

Okay let’s give it a try.
This is the story of the last Empress of China called Yehonala or Orchid. She was born in Rural China to a low ranking government officer. At age 17 she auditioned to become one of the Emperors concubines or wives. Unlike what we think, this was actually a very prestigious position in china. She was chosen as one of the 7 wives of Emperor Hsien Feng, a lower ranking concubine and was to live in The Forbidden city.

Considering the emperor had hundreds of wives and concubines, she decided to create a place for herself rather than living anonymously like so many of the Emperor’s concubines. With the help of her loyal eunuch servant an-te-hai, she found a way into the emperor’s bed and then gradually his heart. She was the only one to give the Emperor a son, an heir to china.

Before his death, the Emperor named his 5 year old son, tung chih, as the emperor and Orchid and his first wife Nuharoo as the court members along with the very powerful Su shun, to run China on behalf of his son.
Orchid survived a coup by the ambitious Su Shun and with the help of the Emperor’s cousin Prince Kung, passed a decree which sentenced him and his loyalists to death. Thus began her 50 year rule in China. This book ends where Su Shun is beheaded and she along with Prince Kung start working together to get China running smoothly. The sequel of the book is ‘The last Empress’, which is all about her reign as an Empress.

This is the plot in very very very short. The novel is full of details and the plot is rich with vivid descriptions of the Forbidden city palaces and gardens.
I found the book very sad at places. Orchid’s struggle to not fade into obscurity, the Emperors struggle to save China from the various internal uprisings and the attacks from the west, the sad and lonely lives that hundreds of the Emperors concubines had to live.

I loved Orchid. She was a very intelligent woman. I loved how she tried to gain the Emperors attention by learning the art of seduction from a prostitute house. I loved how in spite of being royalty she did not lose her original self, did not get lost in the grandeur and beauty of The forbidden city. I loved how she wanted to make her son an Emperor in the true sense of the word, someone who really understood the Chinese and the Chinese culture and history and the workings of the court. She was brave and she knew her mind.

In an odd way I sympathized with the Emperor too. He was called the Son of heaven and was told that nothing he did was wrong. He was a weak man, someone who wished well for his people and his country, but was unable to take the right decisions. He was weighed down by the constant struggle of trying to save China from the various foreign invasions and internal uprisings. In the end, this very struggle made him sick and took his life.

The book is like a roller costar ride. Read it. I am sure you won’t be disappointed.

18 thoughts on “Empress Orchid (The last Empress of China)”