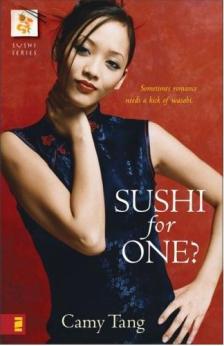 Okay first and foremost, I don’t read many chic-lits. I am not a fan of the genre but I do read one once in a while. I am very selective when it comes to which one to pick. I don’t like books that describe in detail what the girl is wearing every time she goes out. I mean that’s just plain irritating. I understand when she is going to a party or a function or something like that. That’s brings me to the next point. I also don’t like books that describe endless partying. I mean come on. Write something. Where’s the story?

So what’s the point of whatever I have written? Nothing really. I just wanted to tell you that I read a chick-lit and I liked it and well it wasn’t all dresses and parties and that was nice.

Lex Sakai is a Japanese American 4th generation (I think) 30-ish year old woman. Her control freak grandmother wants her to find a boyfriend because after her cousin’s marriage she is the next in line to be married. But Lex is our tom-boyish heroine who has no interest whatsoever in dating because of something that happened to her 8 years back. Her grandmother threatens to withdraw the sponsorship money for Lex’s  girl’s volleyball team. So Lex has no option but to find a guy till her cousin’s marriage.

So she prepares a list. As she’s a Christian, she lists some points from book of Ephesians. Sorry I am not a Christian so I have no idea what this book is about. But the points are what most of the girls would like to find in a guy.

She tries her best to date guys who fit her list but she keeps bumping into Aiden who is not exactly the type of guy she wants, mainly because he isn’t a Christian.

This book was good. The characters were fantastic, all of them, even the background ones. The situations were hilarious and the dialogues funny. Although I didn’t like the part at the end. (It’s something related to Aiden) But since this is Christian fiction it’s understandable. Perhaps Christian’s would understand it better. I didn’t. I wanted her to accept things as it is. But that’s not what happens. This book is also marketed as Romance (Romance with a kick of Wasabi). Although Aiden was an extremely adorable character, there should have been more footage (is that the right word) given to them. Otherwise for a chick-lit, this book is a fine one. Oh did I tell you there are descriptions of amazing mouth watering Japanese food in this book? Do not read it when you are hungry.

Sushi for one is actually a part of the Sushi series. This is the first book in the series.

5 thoughts on “Sushi for One by Camy Tang”