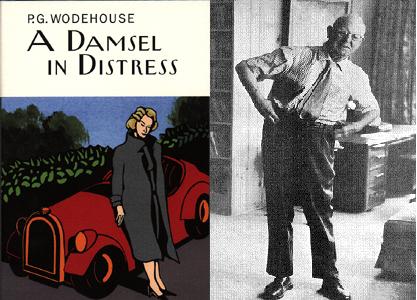 A damsel in distress was fun. P.G.Wodehouse is fun. But I guess you already know that. I don’t know many people who haven’t read and enjoyed this author. I was somehow reluctant to read any of his work. I picked this up from a bookstore after much deliberation and because I loved the title.

This novel has all the ingredients that make a book fun and happening and lively. George Bevan, an American composer, falls in love with Maud, the daughter of Earl Lord Marshmoreton. George had a lot of money and is a nice guy and Maud likes him too. But there is a problem. In fact, there are many problems. First is Lady Caroline, Lord Marshmoreton sister, who wants her step son Reggie to marry Maud. Then there is Maud’s brother Percy, who does not want Maud to marry an unknown American, a man without a title. Besides Percy had a row with George once in Piccadilly because of which he had to spend one night in jail, not to mention his family’s name being tarnished in the newspapers.

But the biggest problem is that Maud is in love with another American called Geoffrey Raymond. Everyone mistakes George with Geoffrey and then what ensues is a comedy of errors and misunderstandings.

All the characters were so lively and colorful, even Percy with his overweight body and his tendency to get into trouble while keeping watch over Maud. Although I didn’t laugh out loud at everything, I did have a smile on my face throughout.

I’ve heard that this is not the best Wodehouse book. But I cannot compare it to others as this is my first. For me, this was excellent. 5/5.

Have you read Wodehouse? Which book do you think is his best?

20 thoughts on “P.G.Wodehouse – A damsel in distress”