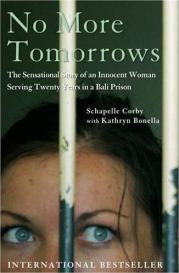 Schapelle Corby was arrested at Bali airport, Indonesia in 2004 when 4.1 Kg of Marijuana was found in her bag. She was in Bali to be a part of her elder sisters 30th birthday celebrations. But little did she know that this holiday would change her life forever.

She was arrested and thrown into Bali’s prison to await trial. Her sister Mercedes hired a lawyer Lily who was none the wiser as it turned out to be her first case ever. Schapelle thought she would be released as soon as they realized that the drugs were not hers. After all she did travel via 2 domestic Australian airports before landing in Bali, there had to be some proof of her innocence somewhere.

But the trial was over and Schapelle was sentenced to 20 years in prison. No More Tomorrows is her journey from a care free women to someone who had her world turned upside down in a few minutes. Schapelle claims throughout the book that she has no idea where the drugs came from. There could be so many simple ways to determine whether she was guilty without doubt but the Indonesian police and the justice system overlooked a lot of things. 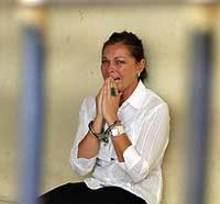 First of all, they did not test the marijuana to determine the concentration, they did not test the marijuana bag for fingerprints in spite of repeated requests by Schapelle and her lawyer. The Australian airport did not have any videos of Schapelle checking in the bag as which could easily determine whether the bag had drugs. It was after all a huge bag.

The Indonesian justice system also did not take into account the testimony of an Australian prisoner who happened to over hear 2 prisoners taking and laughing about how a bag of marijuana was mistakenly placed in someone else’s bag and how she had to go to prison because of that. They also did not take into account the fact that there was a report released about how Australian airport baggage handlers were involved in illegal movement of drugs from the airport.

Everything about Schapelle’s case irritated me and made me more and more angry. I respect Indonesian laws that gives sever punishments to drug peddlers, but at least make sure that the person whose life you are ruining deserves it without any doubts. There were so many things that could have been done to prove her innocence.

Other than having to go through something that Schapelle did not deserve, she also describes the deplorable and at times shocking conditions of the Bali prison. One thing that really shocked me the most was the way the media behaved. We all know what the media is like, we have seen so many examples, but the way the media behaved with her was absolutely disgusting. Here is one the passages from the book which I believe is one the milder ones.
So hard to concentrate: the courtroom is covered with cameras, reporters, TV cameras sitting on the floor in the middle of the court, and when I speak all these microphones are placed down on the table in front of me, and there’s a window behind me with people speaking in Indonesian. Cameramen calling, ‘Corby, Corby’ in my ear; as I turn, they snap the camera. Couldn’t they have a little respect? I have to be completely aware and with no distractions: I am on trial for my life! don’t they understand?
Diary entry, 3 Feb 2005.

Schapelle with her mom

There is a word added in the Urban dictionary: Schapelled which means “to be screwed over – brutally.” What more can I say?

There were a few repetitions in the book but I’m not complaining. I don’t remember ever being so emotionally affected by a book before. It’s probably because what happened to Schapelle could happen to me or my loved ones and it just scares me to no end. If it could happen at the airports of a developed country like Australia, it could happen anywhere.

Schapelle is still serving her 20 year sentence in the Bali prison. I really hope and pray that she is released soon.

Latest Update: Schapelle Corby was granted parole on 7 February 2014 and released on 10 February 2014 after having served nine years in Kerobokan Prison.The ruling however means that Corby will have to live in Bali and follow other rules set by the correction bureau and check in with the Bali corrections bureau monthly until her final release in July 2017

Note: If you haven’t watched the documentary series on NatGeo called Locked up Abroad/ Banged up abroad/ Jailed abroad (same series, different names), please do. It’s a series about normal people like you and me who made a mistake, a misjudgment, got carried away and landed up in prison in third world countries. 99% of these cases are related to drug peddling.

If it doesn’t show in your country, you can watch all the past episodes on the NatGeo website.